Comunicato ufficiale
NYC & Company, New York City’s marketing, tourism and partnership organization, today joined the Port Authority of New York and New Jersey, the City’s Office of Emergency Management (OEM), and representatives of the City’s travel and tourism industry, to provide an update on efforts at the City’s two international airports (JFK and Newark-Liberty) and travel incentives being offered to travelers who are impacted by the interruption of transatlantic air travel between New York City and Europe due to the volcanic ash incident. George Fertitta, CEO of NYC & Company, was joined by Christopher O. Ward, Executive Director of the Port Authority of NY and NJ, Joseph F. Bruno, OEM Commissioner at the Official NYC Information Center in midtown Manhattan.

NYC & Company today announced that it will continue to offer incentives to travelers who continue to have their travel interrupted due to the volcanic ash incident. 37 hotels and three airport transportation providers in the City will offer 15 percent discounts to travelers who have had their stay extended in New York City due to the Eyjafjallajokull volcano in Iceland. NYC & Company is also working with 21 of its member museums, cultural organizations, and attractions to provide discount or free admission for travelers who are in the City as a result of the cancellation of transatlantic flights. In all cases, visitors would show their airline ticket proving that they are stranded in the City due to the volcano incident to receive the offer. The official tourism website for New York City, nycgo.com, continues to offer visitors comprehensive information on all the various discounts being offered along with a list of free and low-cost activities this week for those who are in the City, including information on events, attractions, dining, shopping and more.

“NYC & Company is continually working with our visitor industry partners to ensure that those who are stuck in the City due to the volcanic ash incident have all the resources they need—to make things easier, we are also offering several discounts at our hotels, airport transportation providers, museums, cultural institutions and attractions,” said George Fertitta, NYC & Company’s CEO.

"The Port Authority is working closely with its airline partners, terminal operators and the Red Cross to ensure we meet the basic needs of all travelers delayed by the Icelandic volcano eruption,'' said Christopher O. Ward, the Port Authority's executive director. "We will continue to coordinate with our partners to help ease crowding and delays at our airports when flights resume. We urge all passengers to make sure they have a confirmed seat on a flight before they come to the airport."
The Port Authority of New York and New Jersey has joined with the airlines, terminal operators and the Red Cross to help passengers affected by the Icelandic volcano eruption handle the disruptions caused by flights cancellations at John F. Kennedy International and Newark Liberty International airports. Airport representatives are making sure those who need food and water receive it and are taking special steps where possible, such as providing diapers for babies and helping passengers fill prescriptions. Cots and blankets have been provided to those who need them, shower areas are being made available and we are ensuring food concessions remain open in each terminal. The agency will continue to work with our partners to help reduce delays and congestion at the airports once flights to and from Europe return.

NYC & Company members New York Airport Service, Go Airlink Shuttle, and SuperShuttle NYC will offer a 15 percent discount for transportation to and from John F. Kennedy or Newark Liberty International Airports for passengers who are stranded here due to the incident.

Two attractions including Madame Tussauds and Ripley’s Believe it or Not! Times Square will offer 50% off admission.

A comprehensive list of all the offers can be found at nycgo.com. 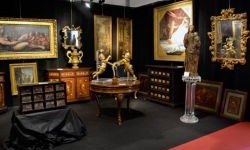